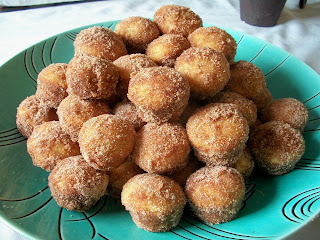 These are amazing! They taste just like the mini donuts you get at the Trade Show - except they're cupcakes instead of donuts. They're also baked rather than fried.. so you can even pretend they are healthier for you ;). I doubled this recipe to make a huge batch for my sister's Graduation party and they were a big hit! 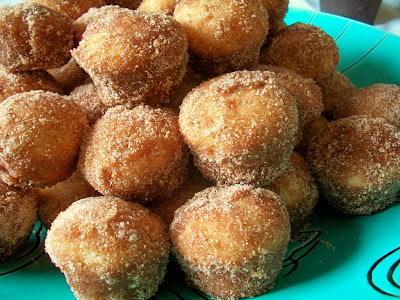 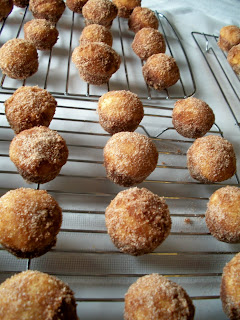 Directions:
Preheat oven to 350 degrees F. Spray a mini muffin pan with nonstick cooking spray.
In a medium bowl whisk together the flour, baking powder, salt and nutmeg until well combined.
In a large bowl, beat the butter with an electric mixer until smooth, then add the sugar and beat on medium speed until blended and creamy. Beat in the egg and vanilla, mixing until smooth and thick.
With the mixer on low speed, add the flour mixture in three additions and the milk in two additions, beginning and ending with the flour mixture. Mix just until the flour is incorporated and the batter looks smooth.
Scoop the batter into the prepared mini muffin pan. Bake for 12 minutes, or until the tops of the cupcakes feel firm and a toothpick inserted in the center comes out clean. Cool the cupcakes on a wire rack.
Melt 6 Tbsp. butter in a bowl and set aside. In another bowl mix 1/2 cup white sugar and 2 tsp. cinnamon.  One at a time, roll the cupcake in the bowl of butter, then in the bowl of cinnamon sugar. Set on a cooling rack or on wax paper for approx. 20 minutes so they will absorb the butter and cinnamon. Enjoy! 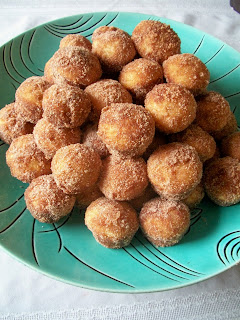 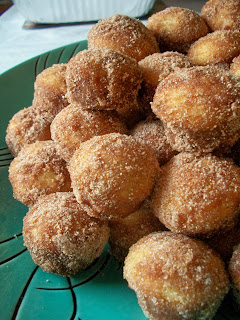