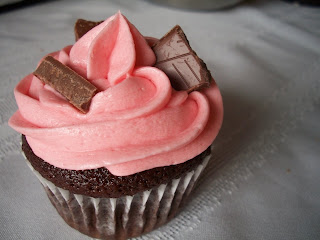 I made these cupcakes to serve at my sister's graduation party and they were a big hit. I tried to mimic a chocolate covered cherry by filling chocolate cupcakes with cherry jelly. This was my first time using Kool-Aid drink mix to flavour icing, and it worked awesome! It gave the icing a huge punch of cherry flavour and also coloured it so I didn't have to use any food colouring. I will definitely be trying out more Kool-Aid flavours in the future. 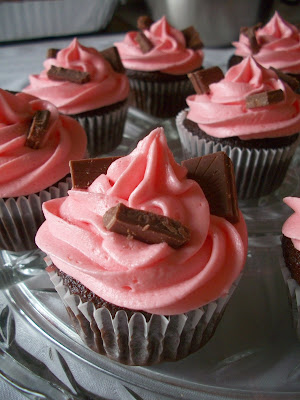 Preheat oven to 375 degrees F and place rack in the center of the oven. Line 2 12-cup muffin tins with paper cupcake liners. This recipe makes approx. 18 cupcakes if you fill the cups almost full.

In the bowl, whisk together the sugar, flour, cocoa, baking powder, baking soda, and salt until well combined.

In another bowl, whisk together the eggs, milk, oil, and vanilla. With an electric mixer, gradually beat the wet mixture into flour mixture. Shift mixer to low speed and add the hot water until blended.

The batter will be very thin, but don't worry it's normal! Pour batter into the prepared muffin tins. Bake for 20-25 minutes, until a toothpick inserted into the center of a cupcake comes out clean. Transfer the cupcakes to a wire rack to cool completely before icing. 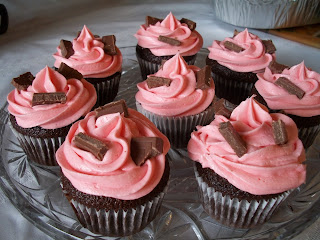 For Icing, Filling, and Garnish:

Beat all the icing ingredients with an electric mixer on low speed until well blended. I added in a little more butter after it was all combined because I don't like my icing to taste too sugary. You can use more or less of the cherry drink mix depending on how strong you want the flavor to be. Just add a little bit at a time and taste test it until it's how you want it.

To make the cherry filling for the middle of the cupcakes, combine the cherry jelly and water in a blender until smooth. The filling should be liquid, but not too runny. If it is runny then just add in more jelly until it is a thicker consistency. Make sure there are no large chunks of cherry in the filling before putting it in the piping bag, because that will cause your piping bag to clog when filling the cupcakes. 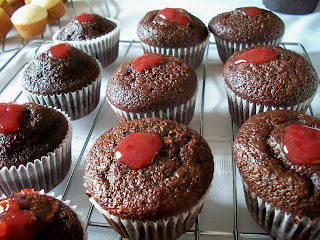 For the garnish, chop up the chocolate bar with a sharp knife. You can make tiny chocolate rectangles or squares like I did, or just roughly chop the chocolate into random pieces. Another option for garnish would be to use chocolate shavings and sprinkle them over the icing.

Once the cupcakes have cooled completely, use a Bismarck Tip 230 to fill the middle of the cupcakes with cherry filling. To do this, fill an icing bag fitted with the Bismarck Tip 230 with the prepared cherry filling. Insert the Bismarck Tip 230 into the cupcake, apply gentle pressure to the icing bag and slowly pull the tip up and out of the cupcake when you feel it start to fill up. There should be a small bit of the filling coming out the top of the cupcake. Don't worry if you fill it too much and it oozes out - all the messy parts will be covered by the icing. Pipe the cherry buttercream on with a 1M Star Tip in a single circular motion to create a swirl. Garnish each cupcake with 3-4 small chunks of milk chocolate. Cover and store cupcakes in the refrigerator so the buttercream doesn't get too soft. 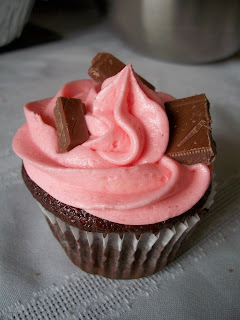 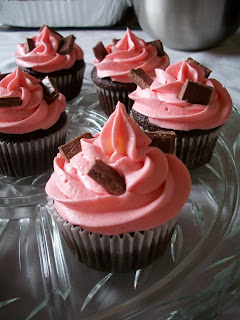 *Recipe by Brooke McMillan
Posted by Brooke at 12:59 AM