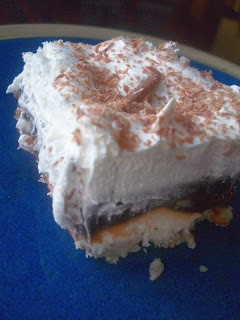 This is one of my family's favorite desserts that we always request for my mom to make. A buttery, nutty shortbread layer is topped with a layer of creamy, sweetened cream cheese, then smooth chocolate pudding, and finally whipped cream and chocolate shavings. It's a great dessert for the hot summer months because it's so simple and doesn't require a lot of baking time. Feel free to halve the recipe to make a smaller 8x8" pan. When my siblings and I were young, our mom called this "Mississippi Mud Pie" instead of "Sex-In-The-Pan" to creatively avoid the inevitable birds and the bees discussion. So if you have little ones then feel free to call it by either name haha. Even though we're all older now, the name stuck and we still call it Mississppi Mud Pie! 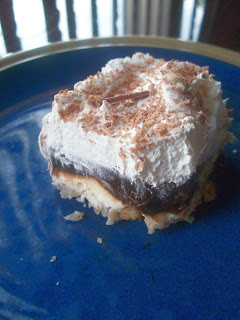 Finely chop the pecans with a knife, food processor, or put them in a Ziploc bag and use a can to smash them.

Using a fork or two butter knives, cut together the flour, butter/margarine, and pecans until crumbly. Evenly press the mixture into the bottom of the prepared baking pan and bake for 15 minutes, or until golden brown. Remove from oven and let cool completely. After it’s had a chance to cool on a wire rack for about 15-20 minutes you can put it in the refrigerator to speed up cooling.

In a medium bowl, cream together the icing sugar, cream cheese and whipping cream with an electric mixer. Evenly spread this mixture over the crust. Place in the fridge to chill while you prepare the next layer.

In a separate, large bowl, mix the chocolate and vanilla pudding mixes, and the milk with a hand mixer until thickened. Pour the pudding mixture over the cream cheese mixture and spread evenly. Place in the fridge to chill while you prepare the next layer.

Prepare the Dream Whip topping according to the package directions, or beat the whipped cream until light and fluffy. Sweeten the real whipped cream to taste with icing sugar and vanilla extract. Evenly spread the whipped cream over the pudding layer. Sprinkle chocolate shavings, a dusting of cocoa powder, or additional coarsely chopped pecans over the top. Serve chilled, and store in refrigerator. 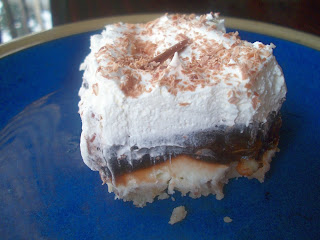 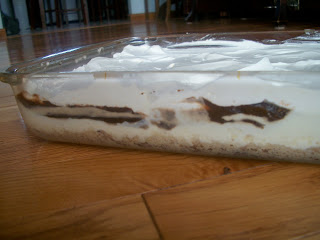 *Recipe from Karen McMillan
Posted by Brooke at 10:00 PM