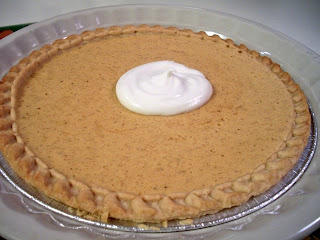 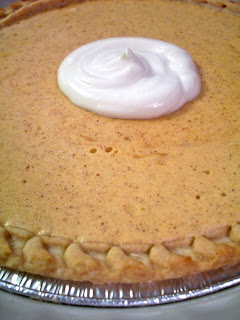 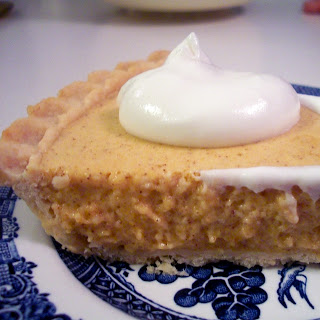 This pumpkin pie is a staple at my house when Thanksgiving rolls around. My mom makes it every year without fail and it is honestly the best pumpkin pie I've ever had! I hope everyone had a great Thanksgiving this year and was able to stuff their face with some delicious pumpkin pie of their own.

9” ready made, baked pie shell - That's right, no need to slave away making your own pie crust for this one.. unless of course you want to! But if you're making this for Thanksgiving you've probably got a million and one other things to cook so save yourself a little bit of time and just buy a pre-made crust. This year my mom and I discovered a fun fact about pre-made pie crusts. No Name brand crust actually tastes way better than the namebrand (i.e. Tenderflake) stuff! So don't bother forking over the extra money for the namebrands and just go for the cheap and tasty one instead.
1 envelope unflavoured gelatin
¾ cup white sugar, divided
1 tsp. gound cinnamon
½ tsp. salt
½ tsp. ground ginger
¼ tsp. ground nutmeg
2/3 cup evaporated milk
3 eggs, separated
1 and ¼ cups canned pumpkin
Whipped cream 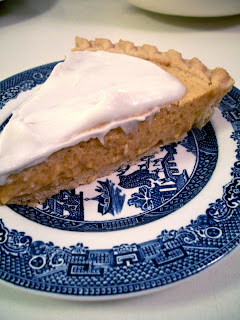 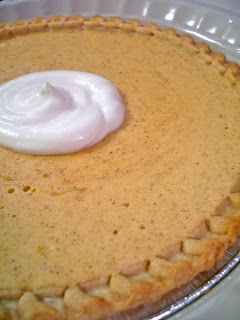 In a saucepan, combine the gelatin with ½ cup of sugar, cinnamon, salt, ginger, and nutmeg. Stir in evaporated milk and beaten egg yolks.

Cook over low heat until slightly thick, stirring frequently. Remove from heat and add in the pumpkin. Chill the mixture in the refrigerator, stirring occasionally until thickened.

Beat the egg whites to soft peaks, then add the remaining ¼ cup of sugar. Beat until they hold stiff peaks. Fold the egg white mixture into the pumpkin mixture.

Spoon the prepared pie filling into the baked pie shell. Top with whipped cream. Serve chilled, and store in the refrigerator. 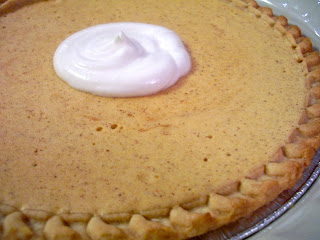 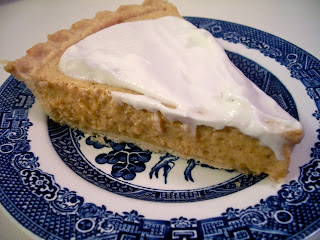 *Recipe from Karen McMillan (my momma!)
Posted by Brooke at 7:04 PM