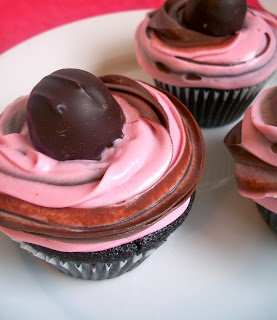 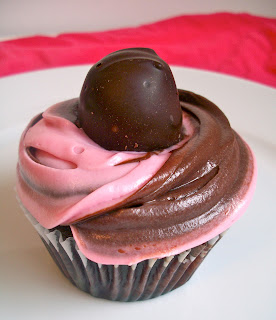 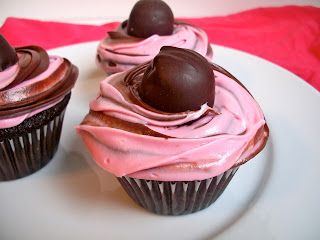 I know not everyone is a fan of chocolate-covered maraschino cherries, but I happen to love them! They make a double appearance in these chocolate cupcakes, both hidden in the middle and sitting on top. I used an icing technique combining chocolate icing and pink vanilla icing that makes an impressive two-tone effect!

I used store-bought chocolate icing and store-bought vanilla icing that I dyed pink to frost these cupcakes. Feel free to do the same, or check out some of my homemade icing recipes on this website! I topped each cupcake with an additional chocolate-covered cherry, so you will need 12 more for the decorating part of this recipe.

In a small saucepan, melt the butter, vegetable oil, and water over low heat.

In a large bowl, whisk together the flour, sugar, cocoa powder, baking soda, and salt. Add the melted butter mixture and whisk or beat with an electric mixture until smooth. Add in the egg and beat until it is incorporated, then add the buttermilk and vanilla and continue to beat until combined, scraping down the sides of the bowl as needed.

Fill the prepared muffin cups 3/4 full with batter. Place a chocolate-covered cherry in the centre of each tin of cupcake batter. 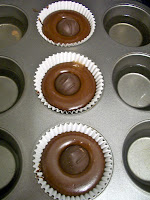 Bake in the centre of the oven for 23-25 minutes, until a toothpick inserted comes out clean with a few crumbs attached and the tops of the cupcakes spring back when gently pressed. Allow the cupcakes to cool in the muffin tin on a wire rack for 5 minutes, then transfer from the tin onto the wire rack to finish cooling completely before frosting. Be careful when handling these cupcakes because the chocolate-covered cherry inside makes them pretty heavy!

To frost these cupcakes you will need a piping bag, large star piping tip, a tall glass, and a spoon or knife. Begin by inserting your piping tip into the piping bag, then place the bag tip-down into the tall glass. Fold the top of the piping bag over the sides of the glass so it fits snugly inside and there is a large hole for you to put the icing into. Using your knife or spoon, scoop the chocolate icing into the piping bag along one side, then repeat with the pink icing. Try to get both types of icings all the way down the piping bag evenly - it doesn't have to be perfect but the two colours should be side-by-side and not one on top of the other. Your piping bag should look something like this, but more full of icing: 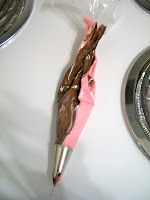 Remove the piping bag from the glass and twist the top closed. Pipe out a small amount of icing onto a paper towel or plate, until both colours begin to come out of the tip at once. Now you are ready to begin icing your cupcakes! Gently, and with even pressure, begin to squeeze the icing bag and make a swirl of icing on top of the cupcake, starting from the outside and working your way to the inner centre of the cupcake. Top each cupcake with an additional chocolate-covered cherry and store covered in the refrigerator until serving. 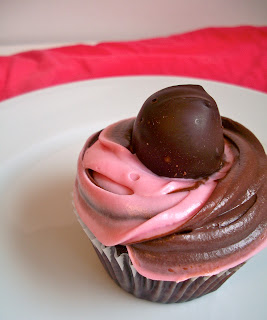 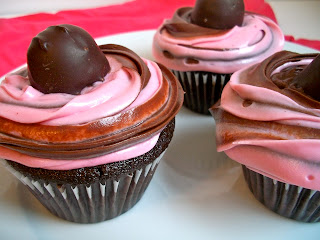