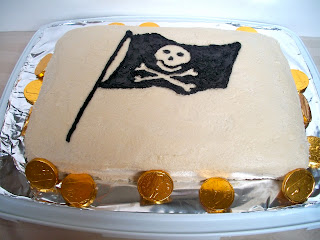 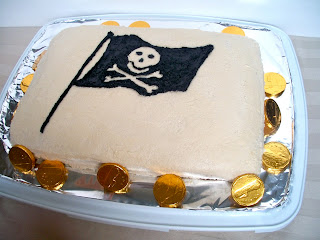 I made this cake for my cousin's pirate-themed birthday party this weekend! Happy 21st Birthday Erin!

The cake was made from a Betty Crocker butter pecan cake mix, which I enhanced by using buttermilk instead of water, and adding vanilla extract and cinnamon. I frosted it with homemade whipped vanilla icing (recipe below) and piped on a pirate flag with black icing, then scattered chocolate loonies around the outside. All the pirates at the party loved it! 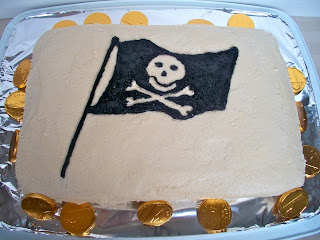 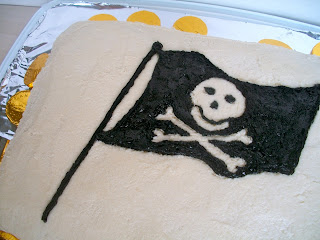 This icing recipe may sound strange because it contains flour and granulated sugar - but trust me, it turns out delicious! The icing is light, fluffy, creamy, and very tasty. It pairs well with any flavour of cake.

In a small saucepan over medium heat, whisk the flour into the milk. Heat, stirring constantly, until the mixture thickens. It should be very thick, like brownie batter. Once it reaches this consistency, remove it from the heat, stir in the vanilla, and let it cool to room temperature. It must be completely cool before you use it in the next step.

While the mixture is cooling, cream together the butter and sugar with an electric mixer until it is light and fluffy. There should be no grains of sugar left. Add in the completely cooled milk, flour, vanilla mixture and beat with the mixer on high for about 5-7 minutes. If it looks separated, then continue beating until it comes together. It should resemble whipped cream once it is done. Spread the icing on cake or cupcakes.

*Icing recipe by The Pioneer Woman 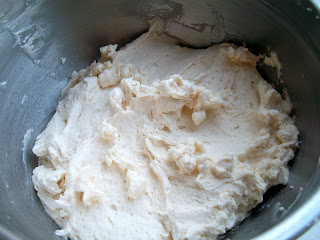